The Porosso is a large, solitary forest herbivore. It can attack at range by spraying some kind of liquid at its enemies.

To kill a Porosso, it is best to use the run-and-gun technique. It has a lot of health and can hit fairly hard, so a melee would not be good for its attackers. The Porosso's ranged attacks are not too accurate, but it is best to keep moving.

The Porosso will, however, easily hit turrets attacking it. 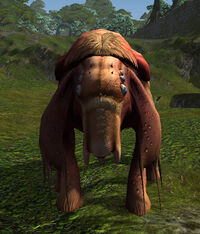